LOVE IN THE TRUTH

Out of necessity, and for the survival of our race as a whole. The black woman has had to carry on her shoulders, and through her womb; the burden of male female energy in the physical realm. However, in the spiritual realm her position as woman; was reconstructed by the oppressor. The strength that we once needed to survive as a race, has no place in this season of God correcting His people. Thu...s making the black woman's strength, her weakness; and she'll only ascend into her correct position, after descending to the darkest place in her soul......LOVE IN THE TRUTH.

There are layers upon layers, that we collectively must be committed to working through, in order to press through to the other side of, Love in the truth..................

I believe in justice, I believe in armies to protect a nation from distruction. But what haunts my dreams; are the strategies to destroy my brother and our family. In the 50's and the 60's; if a man didn't know how to hustle, he couldn't provide for his family. Because after being tricked into fighting in wars; coming home to the family he left behind, he was told by the oppressor, this isn't your family anymore and your woman is now mine. My sisters will argue my case; and say how weak and low-down the black man is. But if she knew the root of his pain; the very root of her womb, she'd humble herself and pray. My brother was told not to worry about his family, as he went off to war to fight for this nation. Public housing and welfare then became her man. Returning home, torn and tattered, from all the blood on his hands. Every door; by design, closed in his face and the jobs promised to him upon his return, didnot manifest. So imagine; after being tricked to fight a war for a country that once held you in chains. Being told, if you live in the "public housing' with your family, we will no longer give her housing or feed your kids. So, momma died from a broken heart as the children grew into bitter angry hearts that keep re-producing themselves; over and over again. It breaks my heart to hear my sister say in one breath; that she's conscious of the struggle and plot against the black man. And in the second breath; tear him to shreds, because he's not the 'reality tv" man she's programmed to demand. It's disheartening to my soul; that my brother's pain runs so deep and has rooted down to his core, that to touch him in love, you'll hear cries of agony, from the hundreds of years of infection. Infection that's rooted in his core. It's the hate, that hate created, reaking havoc in his soul, reproducing itself through her womb. A man's mind is raised to the level of which the women that he associates with. It's the nature of her womb, that has him vibrating at such low frequencies. She has been elevated by way of her womb, in a society that only celebrates her conformity to the "jezebel" existance. He has been lowered by his lower man; confused by the nature of her "jezebel" heart. And the cycle continues. Jezebel, will await his arrival, meet all of his desires; sending her army of "spiritual hell raises" attached to every fiber of his garments, that rested on her bed-post, into his home. Yes, he has the responsibility to excercise some discipline; but as a woman, she is charged by God to never offer herself to a married man, or accept his offers of affections. But she won't, and he won't; because this is the hate, that hate has created........Her hatred of herself; will cause her to hate his wife. She'll hate his wife because he loves his wife. She'll make it her business to inform his wife; of their indiscretions.

See, the media did a hell of a job on the conscience of the "liberated" woman. Her freedom became un-disciplined and she evolved into a "sexually" liberated woman. She's been programmed to act like a "whore" think like a whore and by all means to dress like a whore. She's been programmed to program men, to desire a whore. From her womb, she gave birth to sons, then raised them in an environment of "jezebel" spirits and natures. Because of her "freedom" she allowed other women to dog the very nature and soul of a man into the ground; in front of her sons. Giving her "soul" sisters high fives at the deffamation of the man's character, reinforcing the oppressors implantation into her son's heart and mind, that he's nothing. Why would her son grow to respect women, when momma has no respect for herself? This un-disciplined freedom; has convinced my sisters, that it's ok for Tom, Dick and Harry to come in and out of her bedroom, in larger rotation than the christmas sale at Macy's, as long as the bills get paid. One Pastor called women like this, utility hoes. Placing the woman's vibrations at such low altitudes has given birth to this angry, no-respect having generation. But how can a woman only offer a man her naked/half-naked tail, and expect for him to think above his own tail? I teach my own man-child this: If you put a "whore" on a queen's throne, I'm gone need for you to not get angry or feel deceived, when you realize that there's a whore on the throne in your palace. My granddaddy taught us that you can't turn a whore into a housewife, you'll just have a whore in the house. Since when have sisters been ok with being a "whore" outside of the marital bedroom?

In this season, God is really correcting His people. Spiritually we have been displaced from the true source, and all believers are now being awakened. Who we as women needed to be from free slaves, civil rights leading to today; is not who God can use in the true divine order of our creation. Whether a man called by god has a woman or not; with the woman of god in her correct position, he'll only be elevated to a higher calling, purpose and level of service. The Holy Spirit is guiding us all, it's truely time for us to ascend above and beyond the limits the oppressor placed over our ears, eyes and heart........Correction will keep many from losing their minds when the light of truth can no longer be jaded........As a man thinketh in his heart......so is he.
See, removing our physical perceptions from the flesh and focusing on the works and powerful moves of God. Women were always the protector, the see-er and the visual receiver for instructions that protected the man of god's heart and mind. This weekend, I went to the darkest place in my soul. A childhood recurring dream received clarity. Pharoah's own sister hid Moses in Pharoah's house..........The language of the oppressor has the signals crossed. We are not empowered by man/woman we are ascending to our right position. The position designed for our purpose.......Because we are convinced that we don't need a man for anything, we have assisted the oppressor in the degrading of the black man. A man's mind is raised to the level of which the women that he associates with. Degrees and Pedigrees donot mean you are intelligent, you memorized well.........He can't see details clearly because he's the analytical thinker, we are connected to nature and sky. This is why the enemy worked so deligently to make black women the most neglected, disrespected and un-protected women on the planet. After diobolically; castrating, effeminizing, and ripping the black man from our home. The oppressor came in to save the day. He educated her, and gave her a good job, to make sure that she would remain faithful to him. As he turned her men into "free-will" slaves (prisoners).
The cold bitter TRUTH is that in this season, God IS correcting His people. Watch the signs. We have approached the threshold of the Holy war of all wars. There is absolutely no way "WE" as a people can survive without each other. It was love that was stripped from us, and love that is causing our ascention to a higher frequency that connects us directly to the "TRUE" souce. And what the oppressor is keeping you blind to; is the fact that what it has stolen from you is YOUR god. The God of all creation, which is the Truth in love...........
Posted by Moni Rashad at 3:43 PM No comments: Links to this post

In this season, God is correcting His people. Many people donot know how to clearly articulate their thoughts and feelings. Most often it's best to listen and watch more than you speak. They will eventually show you how and what they think and feel. Our community would thrive holistically if something as simple as honest communication were the governing factor. I'm becoming convinced that there are many that just don't have much on their minds no matter how much you try to communicate.
You may even see their great potential, but if they don't see it themselves......
You may even want what's best for them, but if they don't want it for themselves..........

So many people confuse potential with desire. I may desire for you that which I desire for myself; but if your own personal desires for yourself have no 'flame', you could wipe out my flame. Simply because of the pouring it would take to maintain communication with someone who has little desire. Retreating and holding every thought in your mind can sometimes send the negative thoughts into overload. A simple touch can sometimes shed light and bring peace to the soul. We've all been hurt or betrayed, at one point in our lives. When we allow the bad experiences from the past, to govern our future by allowing it to exist in the 'now', we are giving the past hurt power in the 'now.' We can't control what others do to us, but we do control how we allow it to affect us. We are responsible for our own thoughts and the situations that our thoughts create.....

We often desire what we visualize in our minds but allow the struggles to distract and, sometimes lessen our faith. But in order for us to evolve into what it is we see, we need the struggles in order to exercise our walk in faith. If it's your desire and of 'value' in your purpose, struggle is the price you pay. Every new level brings either birthing or growing pains. Society has conditioned us to 'think' without thinking, meaning that we think before we 'hear.' I've learned to be very careful of the seeds of wisdom that others energy sends in my direction. For me; if the word that's spoken through me, is not worked inside of me, I can't properly process and regurgitate that which the purpose of my words require. Spiritual warfare is such a broad dimension; yet we've been conditioned to only focus on self. Not the 'self' inside that radiates outward, but the 'surface' self whose selfish nature cannot hear the 'truth' inner voice. Again, in this season God is correcting His people. The famous statement of insanity applies even deeper in spiritual application. If you keep seeing, not hearing but doing as you always do spiritually, you will not change the results...............

Prayer changes things inside of us, we change things outside of us. Remove the 'mountain' from your mind and the mountains around you will crumble.
Posted by Moni Rashad at 10:24 AM No comments: Links to this post 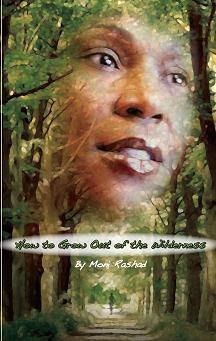 How to Grow Out of the Wilderness By Moni Rashad